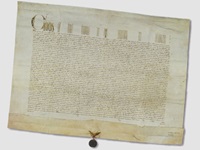 For an everlasting record. It belongs to Christ’s vicar, exercising his vigilant care from the apostolic watch-tower, to judge the changing conditions of the times, to examine the causes of the affairs which crop up and to observe the characters of the people concerned. In this way he can give due consideration to each affair and act opportunely; he can tear out the thistles of vice from the field of the Lord so that virtue may increase; and he can remove the thorns of false dealing so as to plant rather than to destroy. He transfers slips dedicated to God into the places left empty by the eradication of the harmful thistles. By thus transferring and uniting in a provident and profitable way, he brings a joy greater than the harm he has caused to the people uprooted; true justice has compassion for sorrow. By enduring the harm and replacing it profitably, he increases the growth of the virtues and rebuilds what has been destroyed with something better.

A little while ago we suppressed definitively and perpetually the order of the Knights Templar of Jerusalem because of the abominable, even unspeakable, deeds of its master, brothers and other persons of the order in all parts of the world. These men were spattered with indecent errors and crimes, with depravity- they were blemished and stained. We are silent here as to detail because the memory is so sad and unclean. With the approval of the sacred council we abolished the constitution of the order, its habit and name, not without bitterness of heart. We did this not by definitive sentence, since this would be unlawful according to the inquiries and processes carried out, but by apostolic provision or ordinance. We issued a strict prohibition that nobody might henceforth enter the order or wear its habit or presume to behave as a Templar. Anyone doing otherwise incurred automatic excommunication. We commanded, by our apostolic authority, that all the property of the order be left to the judgment and disposition of the apostolic see. We strictly forbade anyone, of whatever state or condition, to interfere in any way regarding the persons or property of the order or to act in prejudice of the direction or disposition of the apostolic see in this matter, or to alter or even to tamper; we decreed all attempts of this kind to be henceforth null and void, whether made knowingly or in ignorance.

Afterwards we took care lest the said property, which over a long period had been given, bequeathed, granted and acquired from the worshippers of Christ for the help of the holy Land and to assail the enemies of the christian faith, should be left without management and perish as belonging to nobody or be used in ways other than those intended by the pious devotion of the faithful. There was the further danger that tardiness in our arrangements and dispositions might lead to destruction or dilapidation. We therefore held difficult, lengthy and varied consultations and discussions with our brothers, the cardinals of the holy Roman church, with patriarchs, archbishops, bishops and prelates, with certain outstanding and distinguished persons, and with the procurators at the council of the chapters, convents, churches and monasteries, and of the remaining absent prelates, in order that, through this painstaking deliberation, a wholesome and beneficial disposal of the said property might be made to the honour of God, the increase of the faith, the exaltation of the church, the help of the holy Land, and the salvation and peace of the faithful. After especially long carefully thought out, deliberate and complete consultations, for many just reasons, we and the said fathers and patriarchs, archbishops, bishops, other prelates, and the outstanding and distinguished persons, then present at the council, finally came to a conclusion. The property should become forever that of the order of the Hospital of saint John of Jerusalem, of the Hospital itself and of our beloved sons the master and brothers of the Hospital, in the name of the Hospital and order of these same men, who as athletes of the Lord expose themselves to the danger of death for the defence of the faith, bearing heavy and perilous losses in lands overseas.

We have observed with the fullness of sincere charity that this order of the Hospital and the Hospital itself is one of the bodies in which religious observance flourishes. Factual evidence tells us that divine worship is fervent, works of piety and mercy are practised with great earnestness, the brothers of the Hospital despise the attractions of the world and are devoted servants of the most High. As fearless warriors of Christ they are ardent in their efforts to recover the holy Land, despising all human perils. We bear in mind also that the more plentifully they are supplied with means, the more will the energy of the master and brothers of the order and Hospital grow, their ardour increase and their bravery be strengthened to repel the insults offered to our Redeemer and to crush the enemies of the faith. They will be able to carry more lightly and easily the burdens demanded in the execution of such an enterprise. They will therefore, not unworthily, be made more watchful and apply themselves with greater zeal.

In order that we may grant them increased support, we bestow on them, with the approval of the sacred council, the house itself of the Knights Templar and the other houses, churches, chapels, oratories, cities, castles, towns, lands, granges, places, possessions, jurisdictions, revenues, rights, all the other property, whether immovable, movable or self-moving, and all the members together with their rights and belongings, both beyond and on this side of the sea, in each and every part of the world, at the time when the master himself and some brothers of the order were arrested as a body in the kingdom of France, namely in October 1308. The gift is to include everything which the Templars had, held or possessed of themselves or through others, or which belonged to the said house and order of Knights Templar, or to the master and brothers of the order as also the titles, actions and rights which at the time of their arrest belonged in any way to the house, order or persons of the order of Knights Templar, or could belong to them, against whomsoever of whatever dignity, state or condition, with all the privileges, indults, immunities and liberties with which the said master and brothers of the house and order of Knights Templar, and the house and order itself, had been legitimately endowed by the apostolic see or by catholic emperors, kings and princes, or by other members of the faithful, or in any other way. All this we present, grant, unite, incorporate, apply and annex in perpetuity, by the fullness of our apostolic power, to the said order of the Hospital of saint John of Jerusalem and to the Hospital itself.

We except the property of the said former order of Knights Templar in the kingdoms and lands of our beloved sons in Christ, the illustrious kings of Castile, Aragon, Portugal and Majorca, outside the kingdom of France. We reserve this property, from the said gift, grant, union, application, incorporation and annexation, to the disposal and regulation of the apostolic see. We wish the prohibition made a little while ago by other proceedings of ours to remain in full force. Nobody of any state or condition may intervene in any way as regards these persons and property in prejudice to the regulation or disposition of the apostolic see. We wish that our decree concerning these persons and property in the kingdoms and lands of the above kings should remain in full force until the apostolic see makes another arrangement.

Occupiers and unlawful detainers of the property, irrespective of state, condition, eminence or dignity, even if this is pontifical, imperial or royal, unless they abandon the property within a month after it is called for by the master and brothers of the Hospital, or by any of them, or by their procurators [. . .]. The property must be fully and freely restored to the order of Hospitallers and to the said Hospital, or to the master, priors, preceptors or brothers of the said Hospital, in any regions or provinces, or to any of them individually, or to their procurator or procurators, in the name of the said order of Hospitallers, even if the priors, preceptors and brothers and their procurators or any one of them have no special mandate from the master of the Hospital, provided that the procurators hold or show a special commission from the priors and preceptors or from any one of them, in the provinces or regions in which these priors and preceptors have been delegated. The priors, preceptors and brothers are obliged to give a full reckoning to the master concerning everything: conduct, actions, receipts and negotiations. The procurators are to render a similar account to the priors and preceptors, and to each one of them, by whom they were delegated. All who have knowingly given counsel, aid or favour to the occupiers and detainers mentioned above concerning such occupation or detention, publicly or secretly, lie under excommunication. Chapters, colleges or governing bodies of churches and monasteries, and the corporations of cities, castles, towns and other places, as well as the cities, castles, towns and other places themselves which were at fault in this, and the cities, castles and places in which the detainers and occupiers hold temporal lordship, if such temporal lords place obstacles to the giving up of the property and its restoration to the master and brothers of the Hospital, in the name of the Hospital, not desisting from such conduct within a month after the property is called for, are automatically laid under interdict. They cannot be absolved from this until they offer full satisfaction. Moreover the occupiers and detainers and those who have given them counsel, aid or favour, whether individuals or the chapters, colleges or governing bodies of churches or monasteries, as also the corporations of cities, castles, lands or other places, incur, in addition to the above-mentioned penalties, automatic deprivation of everything they hold as fiefs from the Roman or other churches. These fiefs are to revert freely without opposition to the churches concerned, and the prelates or rulers of those churches may dispose of the fiefs at will, as they judge will be to the advantage of the churches. Let nobody therefore . . . If anyone . . .

Given at Vienne on 2 May in the seventh year of our pontificate.